I’d heard a lot of information about a little hippy town in the very north of Thailand called Pai. It was a place that was high on my agenda before our trip, much down to the fact that everyone who’d been there had raved on about how great this little place was.

So after spending the majority of our time recently in the hustle and bustle of Thailand’s second biggest city – Chiang Mai, it seemed like the perfect place to escape to for a few days.

We boarded our bus on the Friday morning from the Chiang Mai bus stop bound for Pai, a journey that took around 3 hours and over 700 odd bends that could make the average person feel sick to their stomach. I had heard a lot about the journey from Chiang Mai to Pai before we left, but I didn’t find it too bad at all and the bus stops half way on route at a little shack shop where you can use the toilet for a small fee and buy some water or coke etc. And to be honest, the scenery all the way is breathtaking, if you thought the UK was green think again because the North of Thailand is stunning!

We arrived in the town centre of Pai shortly after lunch. My first impression of the place was that it was extremely geared towards the tourist/backpacker scene and i felt a bit like everyone else in the town, one of many carrying their huge backpacks over their shoulders and pointing aimlessly for directions. Since we’d spent all of our time so far in Chiang Mai and Bangkok, Pai was very different – for starter everything was within walking distance, including our hotel which was 2 mins from the tiny bus stop we’d just left. So no haggling with a tuk tuk driver this time.

We stayed in Medio De’Pai – a boutique hotel with a rather inviting outdoor pool which was a step up for us. The room we had was large and comfy and we instantly felt at ease here.

Walking into the town we quickly noticed that you can get any type of Western dish here, be it burgers, pizza, pasta etc you name it you could find it. Along with that it had football bars and pubs, which was a little weird at first but after a while, when you have been eating rice and noodles for the last few weeks actually became a huge blessing in disguise for us.

After chatting about what tours we were going to do, we walked past a shop renting out scooters/mopeds that had a sidecar attached. We laughed and saw a couple coming back on one and they looked like they’d had the best time of their lives. We also realised that renting one for 24 hours would come in at a lot cheaper than booking a load of organised tours so we went all traveller instinct on ourselves and hired one.

We named our little friend ‘the Percy Paines mobile’ and because neither of us had much moped experience back in the UK we were a little nervous but we hadn’t needed to be. Percy handled really well, it had a lot of poke and we set off out the town following everyone else who had hired a moped. The exhiliration was addictive, the wind on your face as you sped along the huge open roads around Pai was terrific to say the least.

After about 10mins driving we found the entrance and car park for Pai canyon – we pulled up and followed others towards some steps and then my mouth dropped at the views that met us. The canyon is fairly small, with a few shady huts to hide from the heat and then a load of narrow pathways that formed a kind of circle. You needed to tread carefully because the canyon drops were high, very high and there are no railings so you needed to keep your wits about you at all times.

We did a bit of light hiking around but the heat was too unbearable so we hid under one of the huts at the top afterwards and spoke to a Dutch couple whilst we waited for the sunset, like everyone else. And it didn’t dissapoint, about an hour later we got the view that us and everyone around us was waiting for – the sun setting behind the mountains was a real spectacle and such a nice way to round off our first day in Pai.

The second day consisted of an early start to beat the crowds to the White Buddha – a 5 min drive out the town centre where we were met with a load of steps that we ascended – and whilst we turned up nice and early we soon saw a bus pull up shortly after with loads of chinese tourists so we made a run up to the buddha, so we could get a good view and photo snap before they got there. We took in the amazing view from above of Pai and the mountains before the rain hit so we descedned the steps and got back onto percy to head back out of town in the other direction to the first of two waterfalls – Pam bok waterfall.

Now whilst the guy who hired us percy told us it would be fine for the drives to the waterfall, he failed to mention the endless bumpy track that we had to navigate first, pot holes galore and a rather sore bum and back later we arrived at the bottom of the waterfall. That was before we attempted to drive Percy up a hill that it had no chance of making and we almost fell off him, but luckily a local Thai man spotted us and helped us off him and push him to safety. Turned out we hadn’t even needed to attempt the hill in the first place as the car park to the waterfall was right where we already were anyway. Pam Bok waterfall was a real natural beauty – and worth the bumpy ride. We were the only ones there too which made it even better.

After a few more photos, we left the waterfall and stopped off at the ‘I love Pai cafe’. Pulling upto it, i’d never seen anything like it, a cafe with two stories of hanging swinging pod style chairs with the most amazing views of the mountains and northern Thai forest, all whilst sipping an iced coffee had me having to be dragged away by Saff as i could have stayed there all day. 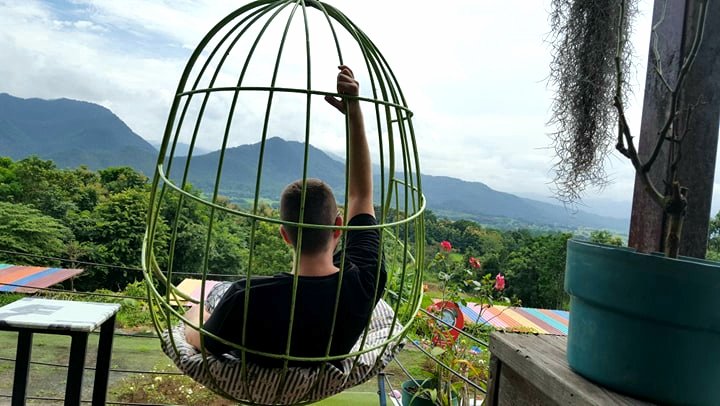 We then drove Percy further up the road to the memorial bridge – a steel bridge dating back to World War 2, with scenic river views. This was a nice little stop off point, although a bit random when we encountered a local dressed as Jack Sparrow standing at the end wanting money for a quick photo and some random looking robot figurines standing in someones garden opposite the road also summed up the town of Pai – a bit trippy!

We then took Percy back along the road toward Pai, where we stopped off at the next cafe which was strawberry themed – ‘love strawberry’ it was called! This place was pretty cool, with a little farm out back where it had some random play area statues to snap. 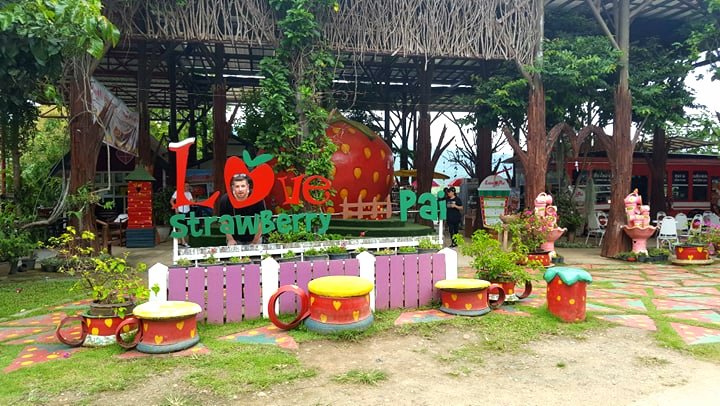 We then headed onto one of the more popular waterfalls in the area – Mo paeng. We made it halfway along the bumpy path when we decided that we were running out of fuel on the old percy mobile so we ended up turning round and heading back to town to get some fuel. After refueling, we felt confident again so started ragging Percy along the main roads, back towards the waterfall, where we followed a bunch of other travellers on mopeds, all laughing and pointing at our poor little sidecar moped, but with some giving us a look of ‘damn wish we’d got one of those’! We soon arrived at the car park for the waterfall, parked Percy up and headed for the small climb to the top.

It didn’t take too long before we were looking over at the peak of the drop, with its cascading pools at the top, we took off our trainers and proceeded to walk amongst the shallow rock pools at the top to take picures. The waterfall was stunning, although this time a little touristy than Pam Bok. We couldn’t help laugh at the sterotypical traveller who’d decided to grow his own version of pirates of the Carribean hairstyle, propped himself up on top of a rock on his own and started playing a flute, whilst taking breaks so he could whistle to the birds – basically a right nob!

After an hour of walking and relaxing by the waterfall, it was time to head back into Pai to hand Percy back. We were really sad to say goodbye to him as he had been so good and so much fun for us – to be honest it was the highlight of the entire trip so far.

Our last few days in Pai involved not a lot really – relaxing by our hotel pool, making friends with an Israeli guy and a Mexican and enjoying some good old Westernised burgers courtesy of ‘burger queen’ – no apparently not a direct relation to Burger King but rather a fine homemade burger restaurant in middle of town which was really something else. We loved the food there, playing cards and listening to the music from the bar across the street in the evening was really fun.

Saff even wrote our names together on the wall of fame they had in the restaurant.

All in all, Pai is a great escape from the cities in Thailand – my advice would be to try a moped if you’re brave enough because the tours are expensive and they are all really easy to get to yourself. Pai was our favourite destination so far and I can see why so many people come here and never leave! We felt the same but had to drag ourselves away!